In case you didn’t notice, our todo list is being wiped clean every single time we launch the container. Why is this? Let’s dive into how the container is working.

When a container runs, it uses the various layers from an image for its filesystem. Each container also gets its own “scratch space” to create/update/remove files. Any changes won’t be seen in another container, even if they are using the same image.

See this in practice

To see this in action, we’re going to start two containers and create a file in each. What you’ll see is that the files created in one container aren’t available in another.

1. Start an ubuntu container that will create a file named /data.txt with a random number between 1 and 10000.

In case you’re curious about the command, we’re starting a bash shell and invoking two commands (why we have the &&). The first portion picks a single random number and writes it to /data.txt. The second command is simply watching a file to keep the container running.

2. Validate that we can see the output by execing into the container. To do so you can use the docker exec command to do the same. You need to get the container’s ID (use docker ps to get it) and get the content with the following command.

You should see a random number!

3. Now, let’s start another ubuntu container (the same image) and we’ll see we don’t have the same file.

And look! There’s no data.txt file there! That’s because it was written to the scratch space for only the first container.

With the previous experiment, we saw that each container starts from the image definition each time it starts. While containers can create, update, and delete files, those changes are lost when the container is removed and all changes are isolated to that container. With volumes, we can change all of this.

By default, the todo app stores its data in a SQLite Database at /etc/todos/todo.db in the container’s filesystem. If you’re not familiar with SQLite, no worries! It’s simply a relational database in which all of the data is stored in a single file. While this isn’t the best for large-scale applications, it works for small demos. We’ll talk about switching this to a different database engine later.

With the database being a single file, if we can persist that file on the host and make it available to the next container, it should be able to pick up where the last one left off. By creating a volume and attaching (often called “mounting”) it to the directory the data is stored in, we can persist the data. As our container writes to the todo.db file, it will be persisted to the host in the volume.

As mentioned, we are going to use a named volume. Think of a named volume as simply a bucket of data. Docker maintains the physical location on the disk and you only need to remember the name of the volume. Every time you use the volume, Docker will make sure the correct data is provided.

1. Create a volume by using the docker volume create command.

2. Stop and remove the todo app container once again with docker rm -f <id>, as it is still running without using the persistent volume

3. Start the todo app container, but add the -v flag to specify a volume mount. We will use the named volume and mount it to /etc/todos, which will capture all files created at the path.

4. Once the container starts up, open the app and add a few items to your todo list. 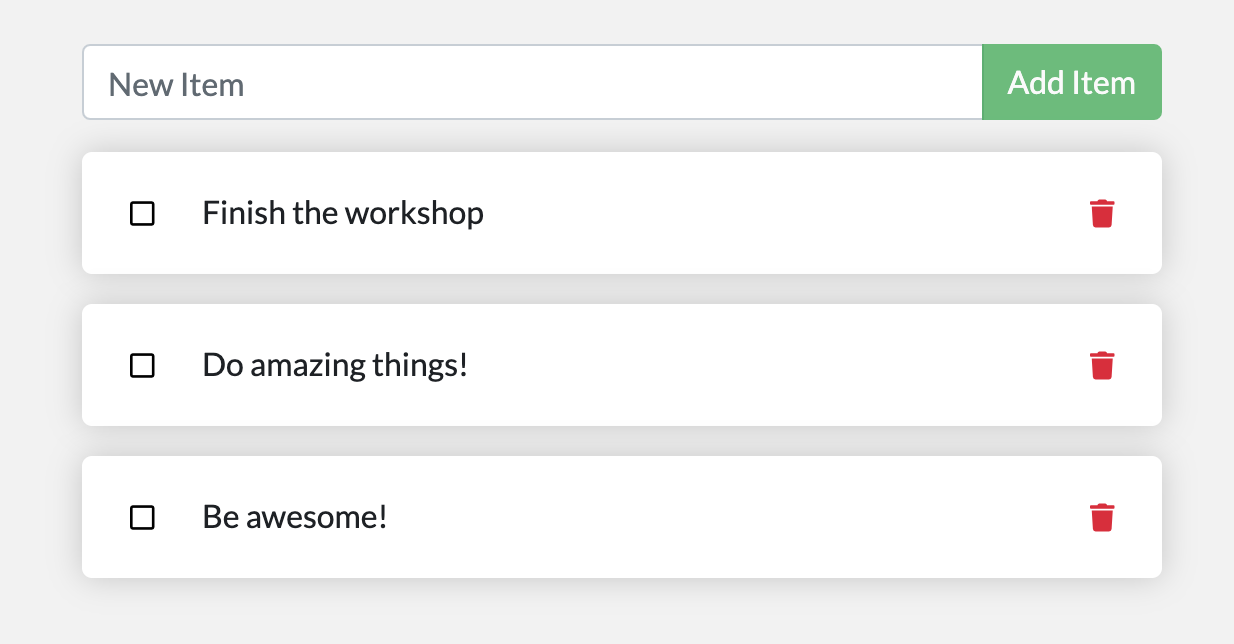 5. Stop and remove the container for the todo app. Use docker ps to get the ID and then docker rm -f <id> to remove it

6. Start a new container using the same command from above.

7. Open the app. You should see your items still in your list!

8. Go ahead and remove the container when you’re done checking out your list.

While named volumes and bind mounts are the two main types of volumes supported by a default Docker engine installation, there are many volume driver plugins available to support NFS, SFTP, NetApp, and more! This will be especially important once you start running containers on multiple hosts in a clustered environment with Swarm, Kubernetes, etc.