For the rest of this tutorial, we will be working with a simple todo list manager that is running in Node.js. If you’re not familiar with Node.js, don’t worry. No real JavaScript experience is needed.

At this point, your development team is quite small and you’re simply building an app to prove out your MVP (minimum viable product). You want to show how it works and what it’s capable of doing without needing to think about how it will work for a large team, multiple developers, etc. 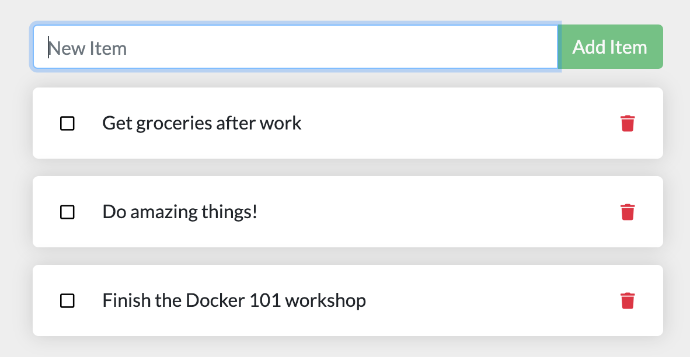 Before we can run the application, we need to get the application source code onto our machine. For real projects, you will typically clone the repo. But, for this tutorial, we have created a ZIP file containing the application.

In order to build the application, we need to use a Dockerfile. A Dockerfile is simply a text-based script of instructions that is used to create a container image.

1. Create a file named Dockerfile in the same folder as the file package.json with the following contents.

Please check that the file Dockerfile has no file extension like .txt. Some editors may append this file extension automatically and this would result in an error in the next step.

2. If you haven’t already done so, open a terminal and go to the app directory with the Dockerfile. Now build the container image using the docker build command.

This command used the Dockerfile to build a new container image. You might have noticed that a lot of “layers” were downloaded. This is because we instructed the builder that we wanted to start from the node:12-alpine image. But, since we didn’t have that on our machine, that image needed to be downloaded.

After the image was downloaded, we copied in our application and used yarn to install our application’s dependencies. The CMD directive specifies the default command to run when starting a container from this image.

Finally, the -t flag tags our image. Think of this simply as a human-readable name for the final image. Since we named the image getting-started, we can refer to that image when we run a container.

The . at the end of the docker build command tells that Docker should look for the Dockerfile in the current directory.

Now that we have an image, let’s run the application. To do so, we will use the docker run command (remember that from earlier?).

1. Start your container using the docker run command and specify the name of the image we just created:

Remember the -d and -p flags? We’re running the new container in “detached” mode (in the background) and creating a mapping between the host’s port 3000 to the container’s port 3000. Without the port mapping, we wouldn’t be able to access the application.

3. Go ahead and add an item or two and see that it works as you expect. You can mark items as complete and remove items. Your frontend is successfully storing items in the backend. Pretty quick and easy, huh?